Gonzalo Bearing Down on Bermuda, Ana Heading towards Hawaii

Currently at Category 3 hurricane status, Gonzalo is closing in on Bermuda and will make its closest pass to the island later this evening. High winds and storm surges are already being reported and things are only going to get worse. The tiny island will feel the effects of Gonzalo predominantly in the form of damaging winds and storm surge flooding. As with any storm of this magnitude, the risk of casualties is high as well. Hurricane force winds are expected from now into the evening and tropical storm force winds may continue through overnight and tomorrow morning. Brace yourself Bermuda, it’s going to get bumpy.

Tropical Storm Ana has been teetering on the brink of hurricane status for several days, but just has not made it. However, conditions are still favorable for strengthening through tomorrow afternoon. The good news is that it is looking more and more likely that Ana will not make a direct hit on The Islands, with the exception of Kauai, which remains in the cone of uncertainty for the final storm track. Major damages are not expected, however, Ana will still bring heavy rains capable of producing localized flooding and mudslides. 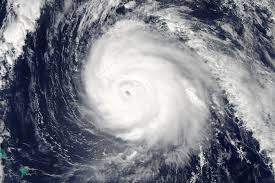